Is South Africa getting better?

A friend told me the other day that although he can respect my optimism when it comes to South Africa, he simply cannot see anything getting better, only worse. Our conversation didn’t finish or it got interrupted by something. It made me think of what exactly has gotten better since 1994? I had the obvious few answers in mind, but I decided to get a proper list…

We all know that the current government certainly inst the best (which government is?), and we all know and ready everyday about the mishaps, corruption, misuse of finances and pure idiocy. But does this mean nothing is getting better? If we for a moment can forget the sensationalism of the news, society that feeds only on bad news and not good news then lets try and find the good things that have happened since 1994:

Make from these stats what you want. Undoubtedly the haters will keep on hating, but I see this as truly good things that are happening in our country. I got these by just doing a quick google, imagine what a proper study would yield… 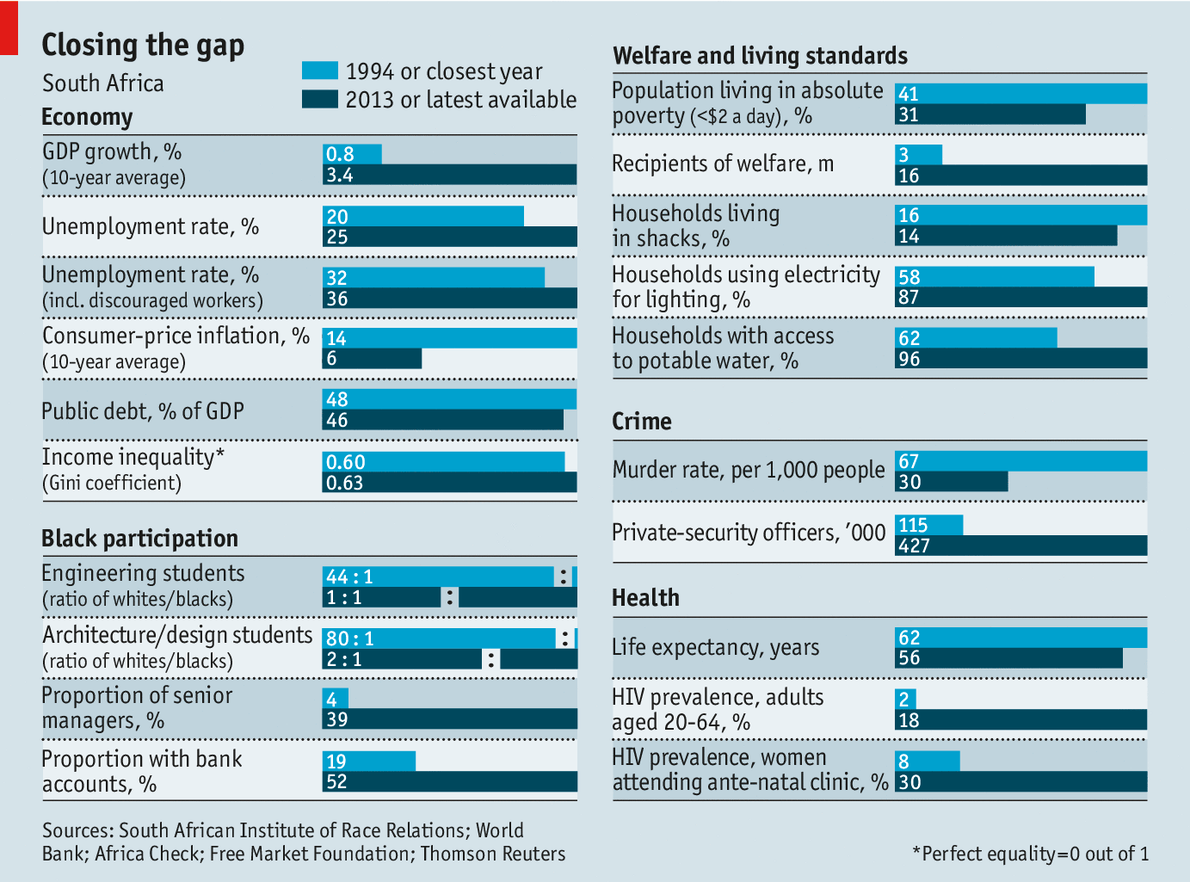 1. Statistics South Africa and the Actuarial Society of South Africa note a improvement in life expectancy for South African citizens.  This could be a result of government measures to combat communicable diseases such as Aids and tuberculosis (TB). Although the cases of people with Aids and TB have increased since then.

2. There is an big reduction in child mortality, with deaths from malnutrition and preventable diseases substantially reduced.

3. The immunization of infants under a year old grew from from 63% in 1998 to 90.8% in 2011. Over the past five years South Africa has achieved one of the fastest rates of child mortality reduction in the world.

4. There has been a stabilization of the number of people living with HIV in South Africa, which had risen all through the 1990s. Prevalence among the youth levelled off between 2009 and 2012; South Africa will probably meet the millennium development goals targets here.

6. The percentage of children up to the age of four in early childhood development facilities increased by 18.4% between 2007 and 2011; for five-year-olds, the increase was 24.6% over the same period.

7. Development Indicators 2012 (sixth edition) shows that adult literacy is increasing and that the percentage of university graduates with degrees in science, engineering and technology is picking up after a decline between 2008 and 2010.

10.. Government has replaced nearly 500 informal settlements with quality housing and basic services over the past five years. Let me emphasize how massive achievement this is. those people now have electricity, water. A proper chance to a future where kids can actually grow up and go to school.

13. On a tertiary level two new universities, Sol Plaatje in the Northern Cape and the University of Mpumalanga have been established.

Shall I go on…