And just like that…everyone wants crypto and bitcoin is the most sought after digital asset in the world!

What started out as a risky investment has turned into a possible part-time career choice. With so many friends jumping on board and crypto currencies exploding its a fun/risky environment to me in. Since my last update things have stabilized a bit and not necessarily for the best.I expanded my portfolio a bit more. I now own:

I can actually see myself doing this on a more permanent level.

The main thought that’s been mulling around in my head is how I ca utilize the money I already made as much as possible so I can put a boost on that early retirement plans of mine. When it comes to financial goals then not working at a big corporation and being financially free is still tops.

I’m formalizing my strategy as a now full-blown crypto investor. I have a bit of a trading background anyway, so most of the technical analysis is not new to me. I understand the concepts of buy low, sell high. Set a cleat in-and-out goals, etc. But, with owning multiple crypto currencies that you’ve bought at various times can get complicated. So, I am putting it all down:

I live by one main rule, and the others flow our of this one rule:

This doesn’t mean buy while an asset’s price is going down, it means buy after it settles. In other words, “buying the dips” should be thought of as buying after a price settles after dropping (although prices don’t always settle for long; so it can also be read as “buy when the price starts recovering.” The other part of this strategy is then to sell at peaks after the price settles again (or while it is going up after a good run or when it starts to come back down again).

This is it. If you manage to do this simple thing consistently you will become rich. LOL. Easier said than done right.

2. Write down your definite IN and OUT figures

Every trade I make I write down how much I expect to make from this trade. I have a clear $ figure written down that if it is reached, I sell. I also have a clear $ figure that if it is reached I will buy. Only on very rare occasions will I wait for a currency to finish its climb or fall after it reached my in-out figures. Ex. ETH just rose past the $850 mark. I sold a percentage. I now know that I am waiting for anything between the $5000/$5500 mark to be reached on its way down before I will buy again. This is a short term buy, which brings me to my third point.

For long term trades I generally do not mind too much about point 2 above. Only the short term (daily/weekly) trades are the ones I spend more focus and attention on.The below image is a breakdown of what a typical crypto portfolio should look like. Pretty conservative if you ask me but it does make sense. I probably have more in purple, but less in orange and green. Yikes!! 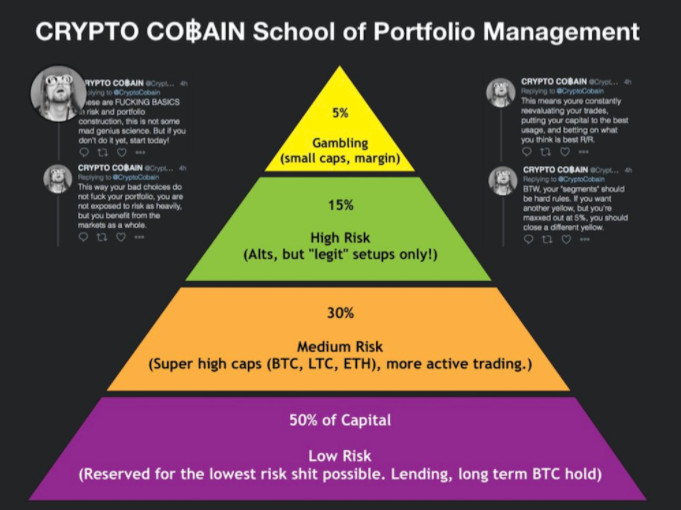