Tolkien lesson for today – On Fëanor and his tragic oath 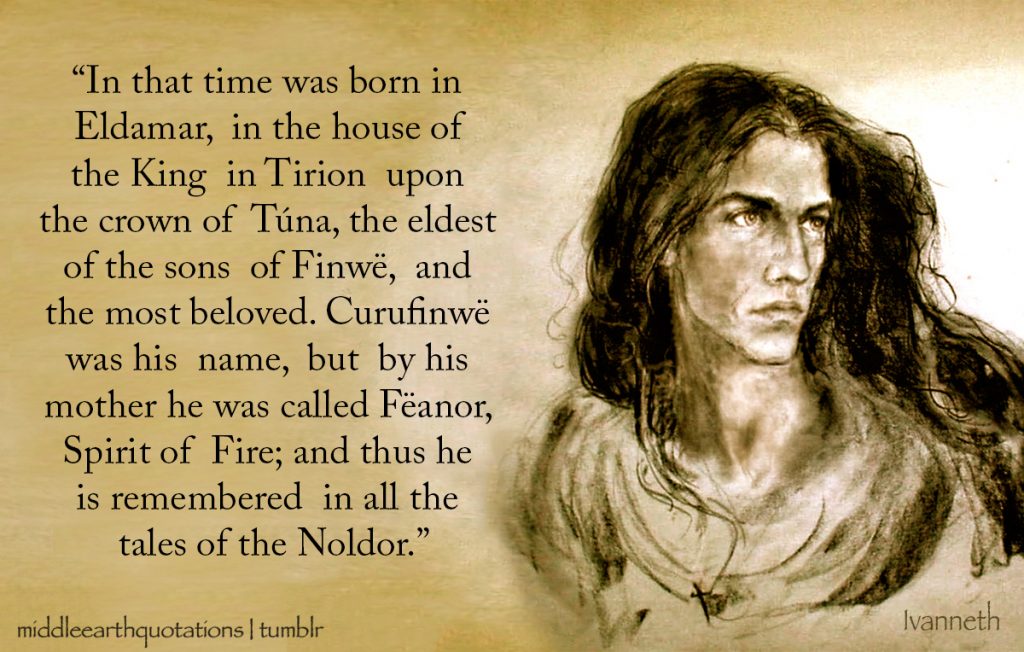 Fëanor is without a doubt one of my own personal favourite characters in the Tolkien universe. I already mentioned Eärendil as one of the most popular but there were none that could compete with the wisdom, skill, passion, anger and determination of Fëanor. He uttered these words which stand as one of my favourite in The Silmarillion:

the deeds that we shall do shall be the matter of song until the last days of Arda.

Such powerful words from the leader of the Noldor, yet also the cause of so much pain and sadness. It is words to live by. It needs a proper explanation to fully carry the meaning across. Here’s a brief history of Fëanor and his quest for vengeance: 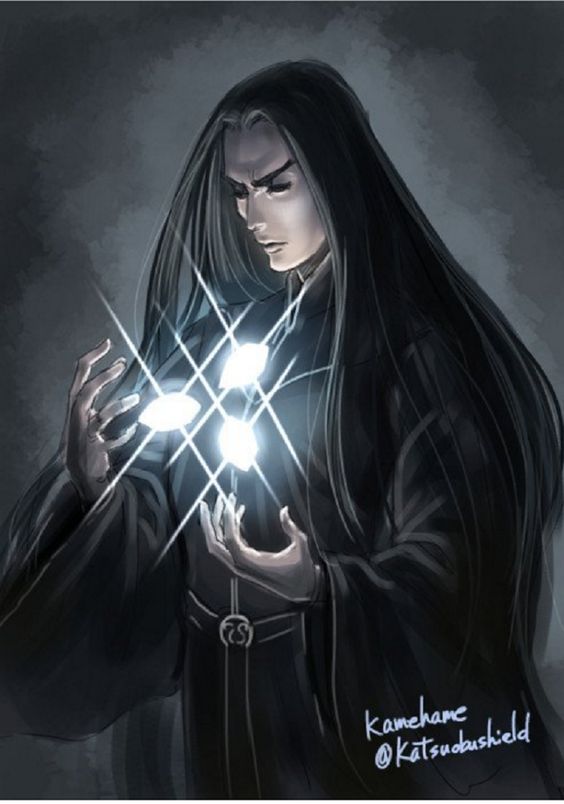 Sadly Fëanor has a bad reputation due to all the controversial deeds he committed while being in Varda and Middle-Earth.  He was a Noldorin elf born in Valinor, the only child of Finwë, High King of the Noldor. He was renowned as a craftsman, gem-smith, and warrior, the maker of the Silmarils and inventor of the Tengwar script. He was also the creator of the seven Palantíri. He was made the mightiest in all parts of body and mind; of beauty, understanding, skill, and subtlety, of all the Children of Ilúvatar. But, he was riddled with flaws, foremost among them selfishness and pride, that ultimately led to him causing his people untold anguish.

Quite an intro right?

By far the greatest of his crafting achievements was the creation of the Silmarils (See brief history of them here). To make them, Fëanor captured some of the light from the Two Trees of Valinor (See brief history of them here) . He came to prize the Silmarils above all else (sounds familiar right? ). The longer he had them, the more he coveted them, and the more suspicious he grew that those around him wished to steal them, despite the fact that this was untrue

Melkor  (the otiginal bad guy, before Sauron) coveted the Silmarils and hated Fëanor, Melkor’s lies eventually came to the point where rumors began to circulate amongst some that Fëanor’s half-brother Fingolfin was planning to seize the Silmarils for himself. In his pride and vanity, Fëanor took little convincing, and his hostility grew to the point to where he threatened Fingolfin with violence. The Valar could not ignore the transgression of breaking the peace of Valinor. For this, the Valar exiled him to Formenos. He took a substantial treasure with him, including the Silmarils, which he put in a locked box.

Ungoliant helped Morgoth destroy the Two Trees, bringing darkness to Valinor. They slew Finwë and ransacked Feanor’s vault, taking many valuable jewels, including the Silmarils. Before this was known to the Valar and Feanor the true light survived only in the Silmarils seeing as the two trees were dead. To restore the Trees and foil Melkor’s malice, Yavanna asked Fëanor to give up the Silmarils so that they could be broken, and the light within them released. But Fëanor emphatically stated that he would not give up his Silmarils of his own free will, and proclaimed that if the Valar forced him to do so that they would be no better than Melkor. Ultimately however, Fëanor’s selfishness made little difference, for a messenger from Formenos then arrived to deliver the news of Finwë’s death and the loss of the Silmarils.

Tension this grows between Feanor, the Valar, and of course Melkor whom from the day of Feanor’s father’s murder was called Morgoth (Black Foe of the World)

In his anger Fëanor gave one of the most impassioned speeches ever delivered in Arda. He railed against Morgoth, but because of Morgoth’s influence and his anger he also blamed the Valar for Morgoth’s deeds, there was neither bliss nor surety of safety to be found in Aman any longer. He evoked images of the kingdoms his people could build in Middle-earth, and the glory that could be theirs once they regained the Silmarils. Fëanor then swore an oath by the name of Ilúvatar himself that he would suffer none, no matter their race or reasons, to withhold a Silmaril from him, and that he would pursue with violence any who attempted it. The Oath of Fëanor was also taken by his seven sons. His impassioned speech swayed most of those present. Dissension quickly arose regarding who should lead the hosts to Middle-earth. For Fëanor, though he was technically High King. Greater love was given to Fingolfin and his sons, and most of the Ñoldor desired greatly that Fingolfin and his sons should go with them and lead them. Fingolfin was not eager to go, but he had sworn to uphold his brother’s rights as the eldest, and furthermore he did not wish to leave his people to the mercy of Fëanor’s rash and often selfish courses of action. Thus against his wisdom, Fingolfin marched with a second and larger host than Fëanor, and Finarfin commanded a third, smaller, and quite reluctant host. However, even with the three sons of Finwë leading the way, about a tenth of the Ñoldor chose simply to stay. 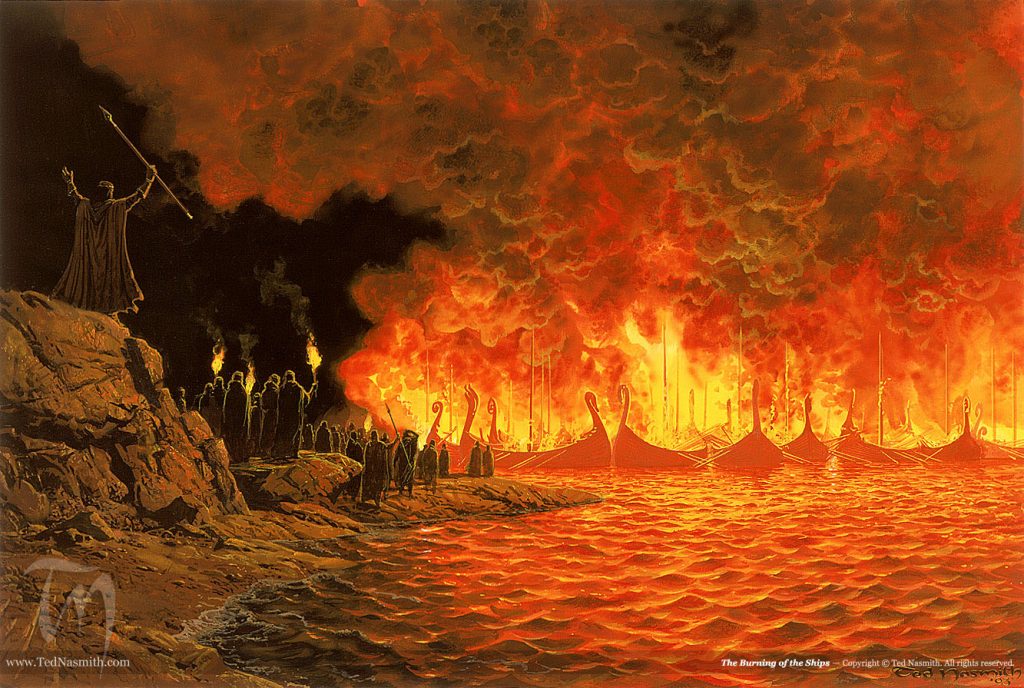 In order to get the Middle earth Fëanor and is followers needed to crosss a wide treacherous and bitterly cold region of shifting arctic ice. Fëanor  asked the seafaring Teleri elves but the Teleri had no desire whatsoever to leave Aman, and would not give Fëanor their ships. However, Fëanor would not take no for an answer, as such, he persuaded his host to aid him in taking the ships by force. This he attempted, and the Teleri resisted, casting many of the the Ñoldor into the sea and thrice driving them back despite being far more lightly armed than the Ñoldor. However, Fingolfin’s host, which had been slower and less eager to start the journey, came upon the battle in progress. Believing that the Teleri had been the aggressors, perhaps on the orders of the Valar themselves, Fingolfin’s host came to the aid of his brother’s and the Teleri were overcome. The ships were stolen, and many of the Teleri mariners were wickedly slain. Upon this tragic event a figure that may have been Mandos himself appreared to Feanor and his host and uttered a terrible Doom, exiling them from Valinor forever and foretelling that their war against Morgoth would cause them only misery. Due to their wickedness in slaughtering their kin, they would be utterly forsaken in the eyes of the Valar, and would receive neither welcome nor aid from Valinor in their struggles. Additionally, Fëanor and his house were cursed, and Mandos foretold great suffering and hardship would be their lot, due in no small part to the oath they had taken to regain the Silmarils at all costs. Above all, the figure made it clear that any war made by the Ñoldor against Morgoth would be utterly hopeless, for the Ñoldor, being Elves, did not have the power to overcome a Vala.

However, Fëanor’s most loyal forces had maintained control of the Teleri fleet after having seized it. As the dissent grew worse, Fëanor decided to simply abandon all those whose loyalty to him was not absolute, and he and his followers slipped away one night in the ships. They arrived at Losgar, in the land of Lammoth, in the far west of Beleriand, where Morgoth and Ungoliant had passed not long before, and upon arriving, Fëanor decided to burn the ships and leave the followers of Fingolfin behind. The ultimate betrayal against Fingolfin and his host. Fingolfin now had the choice of either returning to Valinor in disgrace, or proceeding to Middle-earth across the treacherous ice stricken plain on foot. Fingolfin and his people chose to attempt the crossing, eager to confront Fëanor and his people over their betrayal. The journey was a long and terrible one, and Fingolfin’s host suffered great losses along the way, which added to the bitterness they felt for Fëanor and his sons. 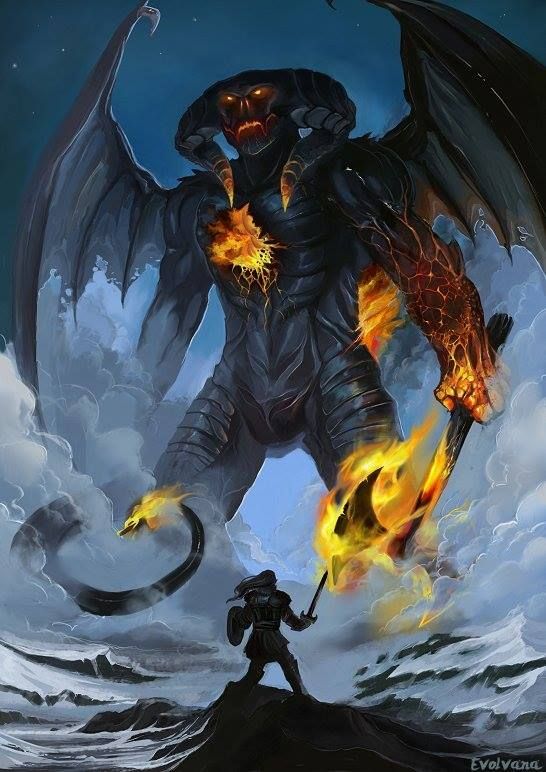 Learning of the Ñoldor’s arrival, Morgoth summoned his armies from his fortress of Angband and attacked Fëanor’s encampment in Mithrim. This confrontation was called the Battle under the Stars, or Dagor-nuin-Giliath, for the Sun and Moon had not yet been made. The Ñoldor won the battle handily, and destroyed Morgoth’s armies. But Fëanor, exhilarated by the victory and ever prideful, pressed on toward Angband far ahead of his army with only a small vanguard. As he approached Angband, the Orcs, seeing that Fëanor’s numbers were so few, turned and gave battle. Due to their proximity to Angband, they were reinforced by a number of Balrogs, who quickly slew most of the Elves. But Fëanor was undaunted, and though he was dealt many wounds, he long fought on alone. At last however, he was stricken to the ground by Gothmog, the Lord of the Balrogs.

Fortunately for Fëanor, his sons arrived with a substantial relief force. The Balrogs returned to Angband, and Fëanor’s sons took him from the battlefield. However, Fëanor knew that wounds were mortal, and bade his sons to stop. He looked upon Angband and cursed Morgoth thrice, but gazing upon the sheer scope of Morgoth’s stronghold, he understood at last the truth of Mandos’s words; that no force of the Ñoldor would ever overthrow the Dark Lord. Nevertheless, he instructed his sons to keep to their oath and avenge their father. As he died, his fiery spirit left his body and burned it to ash

Fëanor’s remaining sons were still bound by the Oath to recover the Silmarils, and this oath would eventually see two more Kinslayings come to pass, each more horrific than the last, and would work to undermine the Elven war against Morgoth in many important ways

This is one of the best tales ever told. So much emotion, anger, sadness and joy.  Nothing encapsulates this more for me than a power metal band’s album I discovered way back in the 90’s. This is Blind Guardian’s Middle Earth album. Every song on the album tells a part of the tale in the Silmarillion. Check-out the following song called “The curse of Fëanor” which beautifully describes the oath of Fëanor right after the murder of his Father and the theft of the Silmarills.

Soon you will be free
Set your spirit free
“Suddenly I realized
The prophecies
I’ve never believed in
My deeds were wrong
I’ve stained the land
And slain my kin
(Burning Soul)
There’s no release from my sins
It hurts
THE CURSE OF FËANOR RUNS LONG
Time and only time will tell us
Tell: was I right or wrong?
When anger breaks through
I’ll leave mercy behind”