Tolkien lesson for today – a light in dark places

Today’s quote comes from another favorite scene of mine from Lord of the rings, which lead to an even greater scene later on. The quote:

The scene is of-course the gift-giving scene between Lady Galadriel and the fellowship. Frodo was given the Phial of Galadriel. I’m sure he was not aware how handy this gift would come in, and what a spectacular gift this was ! This is no ordinary phial with magic fluid in it that shines bright when you shake it. No. The history behind the phial is as glorious and detailed as just about everything is in Tolkien’s world.

The Phial of Galadriel was a crystal phial filled with water from her fountain which held the light of Eärendil’s star. Who was Eärendil and what was his star? It requires a detailed answer so stay with me…

Eärendil is one of the most important figures in the entire Middle earth history. He was Numenorean, from the first race of elves. And although he was Half-elven he was raised in Gondolin (Yup, hardcore fans will be amazed!) and the father of Elrond, the same Elrond we came to know in Rivendell / Lord of the rings.

Due to a long and detailed story Eärendil took on the impossible task of travelling to Valinor (gray havens/ heavens) and thus became the first of all mortals to set foot in Valinor. Eärendil then went before the Valar / angels, and asked them for aid for Men and Elves in Middle-earth, to fight against Morgoth (before Sauron). The Valar accepted his plea and The Valar went with a mighty host to Middle-earth, and overthrew Morgoth, and bound him for all time. 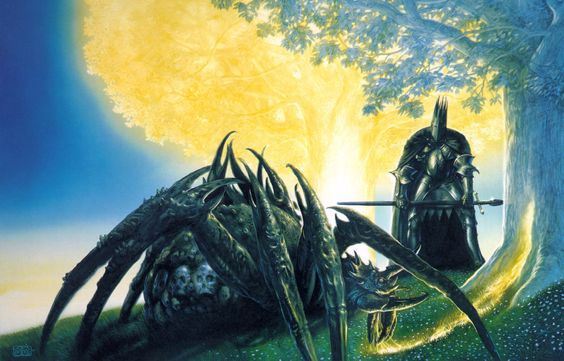 Morgoth and Ungoliant just before they destroyed the Two Trees.

There were also the two trees of Valinor known as the Trees of the Valar. Laurelin (the Gold Tree) and Telperion (the Silver Tree), brought light into the Land of the Valar in ancient times. They were the most cherished and purest examples of good and light in Middle-Earth. Sadly (due to more detailed and complex battles between Morgoth and the Valar) the two trees were destroyed and although one of the trees offpsring reside still in Gondor as the White tree of Gondor, the purest light of the trees still resides and were preserved in the gems known as the silmarils. 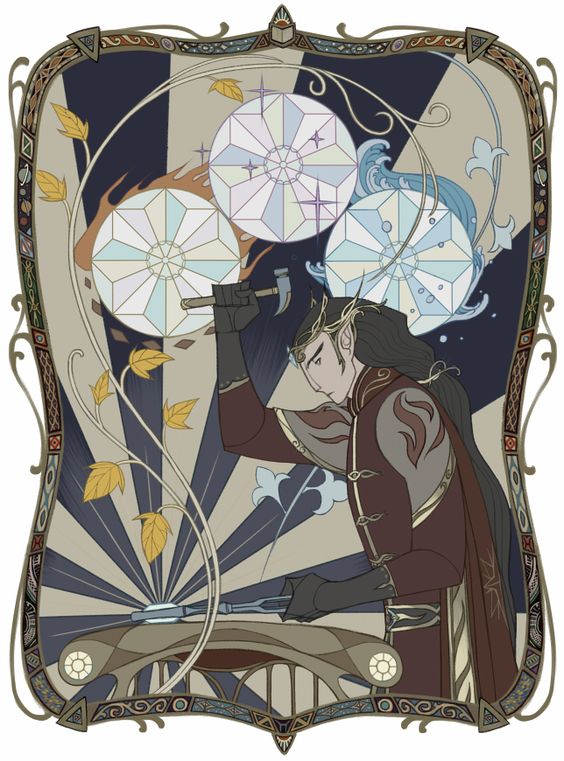 Feanor – the creator of the 3 Silmarils. “And thus it came to pass that the Silmarils found their long homes: one in the airs of heaven, one in the fires of the heart of the world, and one in the deep waters.”

Much can be said about the Silmarils, as most of the evil and wars in the first two ages were directly or indirectly caused by them. Also known as the Jewels of Fëanor, were gems crafted by Fëanor from some essence of the Two Trees of Valinor; Laurelin and Telperion, before the First Age. They were among the most prized of all the wonders crafted by the elves and were coveted by many. It was said that the fate of Arda was woven about the Silmarils.

It was one of these gems that Eärendil took with him to the Valar. The Valar then set this Silmaril as a star. And it became known as the Star of Eärendil.

It is this light, this power, this good that is contained in the phial given to Frodo! The purest light of the Two Trees as preserved in a Silmaril. What an amazing gift! The phial alone would have been enough to defeat Sauron! Or at least get him on the run!

Which brings me back to the quote. Do you have a light like this? What is your “phial of Galadriel”? Do you trust in the light to help you when darkness comes? It does not have to be a physical object, but I found that there definitely needs to be something we can hold onto in times of darkness. How often do you use it / depend on it?

Darkness may be just around the corner.