Tolkien lesson for today – The road goes ever on 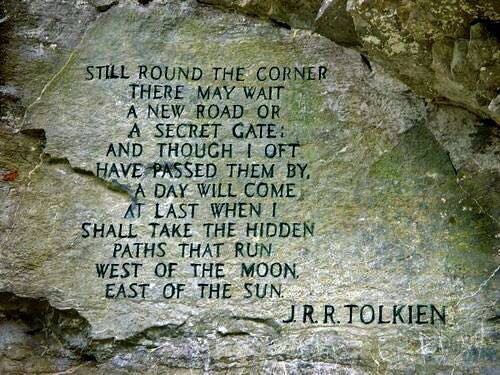 Today’s quote is far less popular than the previous one but no less powerful in meaning and purpose. I am happy it made its way into the movies yet the most avid movie fans may have missed it. The quote is in relation to the popular Tolkien/Hobbit song “The road goes ever on“. There are many versions of the song as the Hobbits seem to have changed it as time goes by. The first is in The Fellowship of the Ring. The song is sung by Bilbo when he leaves the Shire. He has given up the One Ring, leaving it for Frodo to deal with, and is setting off to visit Rivendell, so that he may finish writing his book.

Such a fitting song for that moment. Only two people have managed to willingly give up possession of the ring: Bilbo to Frodo, and Sam also to Frodo.

Can you remember where in the movie this song is? Large parts were included in Billy Boyd’s “The Last Goodbye” on the soundtrack of The Hobbit: The Battle of the Five Armies. I’ve included this awesome song/video at the bottom of this post as well.

The Road goes ever on and on
Down from the door where it began.
Now far ahead the Road has gone,
And I must follow, if I can,
Pursuing it with eager feet,
Until it joins some larger way
Where many paths and errands meet.
And whither then? I cannot say.

The third version appears in The Return of the King, Book VI, Chapter 6. It is spoken by Bilbo in Rivendell after the hobbits have returned from their journey. Bilbo is now an old, sleepy hobbit, who murmurs the verse and then falls asleep.

Still round the corner there may wait
A new road or a secret gate,
And though we pass them by today,
Tomorrow we may come this way
And take the hidden paths that run
Towards the Moon or to the Sun.

This is a wanderlust song isn’t it? It makes my mind wonder and think about countries far away and lands unexplored. Oceans to travel across and cultures to experience. This also reminds me that life is a pathless land. We carve our own paths as we go. Sometimes we walk on a small foot path and other times we make our own. Mostly though we are left to decide for ourselves and we need to decide what hidden path or open road we will take.

Life is an adventure. It should be an adventure. It should be fun, exciting. This quote challenges me to make life as such. It challenges me to go out and find that secret gate or hidden path. Sometimes we get so bogged down by work and all adventure passes us by without us even noticing it. We need to stop, look up and start noticing the excitement around us! There’s hidden paths and secret doors every where. Can you see them? Do you take them?

Here’s the original as written in The Hobbit:

Roads go ever ever on,
Over rock and under tree,
By caves where never sun has shone,
By streams that never find the sea;
Over snow by winter sown,
And through the merry flowers of June,
Over grass and over stone,
And under mountains in the moon.

Roads go ever ever onUnder cloud and under star,
Yet feet that wandering have gone
Turn at last to home afar.
Eyes that fire and sword have seen
And horror in the halls of stone
Look at last on meadows green
And trees and hills they long have known.