Create a Habit by starting small

I’ve been reading up a lot on habits, and how to cultivate good habits, and break bad habits. Check this post of mine. I found this image Yesterday and I thought shows perfectly what I am trying to do. Start small and move your way up. 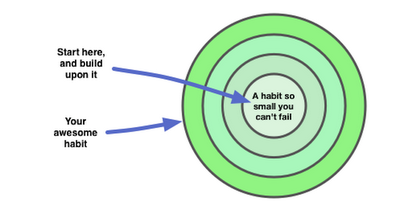 By starting with a small, easy habit that you cannot easily fail in, you increase your chances of achieving something you set your mind to. And as I’ve mentioned, achieving any type of goal is priceless, it is the first step toward true happiness. Here’s the trick.

-Start with a small habit, that is easy to do and difficult to fail in. Typically this would be my smoothy habit I have created. A not so good choice would be to give up smoking. I think you get the point.

-Slowly increment the habit by adding other ones that build on the original small habit. This could be getting up 10min earlier then making the smoothy, and then eventually getting up early, going for a run, then having the smoothy.

We all will fail in any of our habits sooner or later, the trick is to not let this stop us from cultivating a habit. How many times have you gone to the gym, started a good routine or habit, and then missed ONE DAY which was the end of it, you never went back to the gym? The reason for not going back is not because you did not know how the good the habit was for you, or how you even enjoyed it. But the reason why the habit got broken was because of the disappointment of missing that one time when you planned not to.

Learn to accept disappointment, get over it and get back at it. Expect failure, don’t see it as a massive blow. If you expect it you will deal with it easier.

Good luck with whatever habit it is you are starting, I am pumped to keep at it!